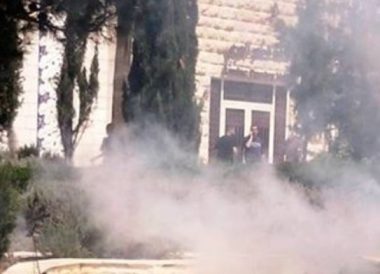 Israeli soldiers injured, Sunday, 98 Palestinians after the army attacked protesters in front of the Al-Quds University, in Abu Dis, east of occupied Jerusalem; two of the wounded were shot in the head, and one in the chest.

The Palestinian Red Crescent Society (PRC) said its medics provided treatment to 87 Palestinians who suffered the effects of teargas inhalation, and five who suffered burns from Israeli gas bombs and concussion grenades and moved four of them to a nearby hospital.

It added that another Palestinian was shot with a rubber-coated steel bullet, which struck him above one of his eyes, causing a moderate injury.

Another Palestinian was shot with a rubber-coated steel bullet which penetrated his chest, causing a moderate injury, before he was rushed to Palestine Medical Complex in Ramallah.

On Sunday evening, the soldiers installed a military roadblock, and abducted a young man, in addition to confiscating his motorcycle, near Sielet al-Harithiyya town, west of the northern West Bank city of Jenin.

The soldiers also installed a military roadblock at Kafr Dan village junction, near Jenin, stopped and searched dozens of cars and interrogated many Palestinians while inspecting their ID cards.