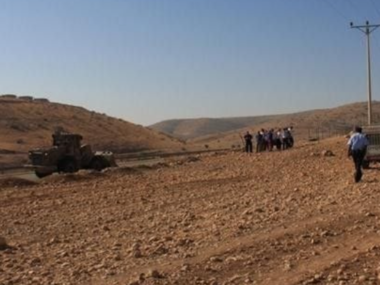 Israeli soldiers bulldozed, Wednesday, an agricultural road in the Masafer Yatta area, south of Hebron city, in the southern part of the occupied West Bank.

Rateb Jabour, the coordinator of the National and Popular Committee against the Annexation Wall and Colonies in southern West Bank, said the road was paved by the Palestinians in the year 2019.

He added that the road is used by the Palestinian farmers in Yatta, Masafer Yatta, and Khallet ad-Dabe’ area, and leads to several communities in southern Hebron.

It is worth mentioning that a week ago, the army issued an order for the destruction of the road as part of the ongoing attempts to confiscate the Palestinian lands for the construction and expansion of Israel’s illegal colonies.

In related news, the soldiers invaded, on Wednesday at dawn, the al-Biereh city in central West Bank, before storming and ransacking the headquarters of the Palestinian Health Work Committees and shut it down.