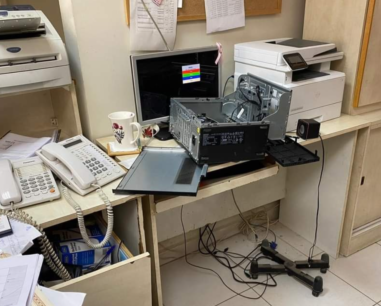 Israeli soldiers invaded, on Wednesday at dawn, the al-Biereh city in central West Bank, before storming and ransacking the headquarters of the Palestinian Health Work Committees and shut it down.

The soldiers smashed the main door of the committees, before storming the building and conducting violent searches, causing excessive damage to its furniture, offices, and computers.

In a statement, the Health Work Committee said the Israeli attack is part of Israel’s ongoing aggression and violations targeting the public health institutions in occupied Palestine. The soldiers also invaded the home of Farid Morra, the former chairman of the Board of Directors of the Health Work Committees, in the at-Tira neighborhood in Ramallah city, and abducted him.

In addition, the soldiers invaded a printshop in the Sateh Marhaba neighborhood in al-Biereh and shut it down. It is worth mentioning that, in recent years, the Israeli army invaded and closed many Palestinian institutions in the occupied West Bank, including Jerusalem, and confiscated their belongings.

Most of these institutions are funded by European countries and provide basic services for the Palestinians, however, Israel constantly targets them while various Israeli officials continue to call for ending their funding.

During the invasion into Tubas, in northeastern West Bank, the soldiers stormed and ransacked several homes, before abducting Aseed Shafiq Kharraz, 33, and Nader Mustafa Sawafta, 47, in addition to shooting three Palestinians, including one who suffered a critical injury.