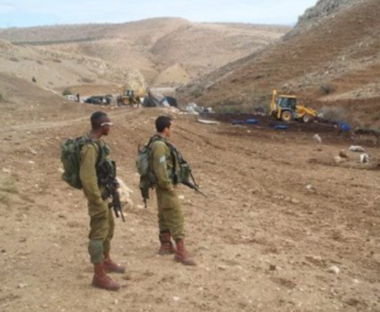 JORDAN VALLEY, Wednesday, June 09, 2021 (WAFA) – The Israeli occupation authorities today surveyed a large tract of Palestinian land in Khirbet al-Himma in the northern Jordan Valley, according to an official.

Mu‘taz Besharat, who monitors Israeli colonial settlement activities in the Tubas district, said that Israeli forces stormed the community and conducted surveying and mapping operations for dozens of dunums of Palestinian land in the area.

Besides undergoing temporary displacement, the Palestinian families living there face a myriad of restrictions on access to resources and services. Meanwhile, Israel exploits the resources of the area and generates profit by allocating generous tracts of land and water resources for the benefit of settlers.