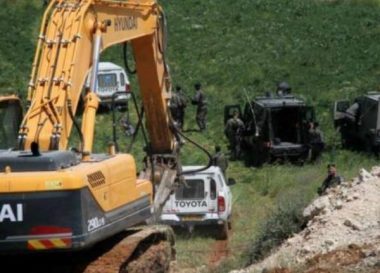 On Wednesday morning, dozens of Israeli soldiers, accompanied by bulldozers, invaded Palestinian agricultural lands in the al-Jab’a village, southwest of Bethlehem, in the occupied West Bank, and bulldozed them to conduct military training.

Thiab Masha’la, the head of al-Jab’a Village Council, said the soldiers invaded al-Khour area, west of the village, and started bulldozing the lands, in an area of ten Dunams, owned by the families of Abu Latifa, Hamdan and Abu Lowha.

Masha’la added that, a week ago, the soldiers bulldozed a Palestinian land near a military roadblock, west of the village, in order to expand the roadblock.

In related news, the Palestinian Prisoners’ Society (PPS) has reported that Israeli soldiers have abducted, on Wednesday at dawn, at least twenty-five Palestinians, including children, during massive military invasions and violent searches of homes, in different parts of the occupied West Bank.

In the Gaza Strip, the soldiers fired missiles into various areas in the besieged coastal region, causing excessive damage to homes and buildings, and wounding seven Palestinians.