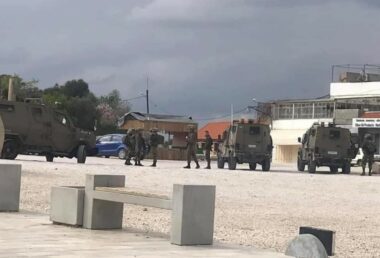 Mohammad Azem, the mayor of Sebastia, stated that several Israeli army jeeps, accompanied by bulldozers, invaded the town before heading to the site, and closed it along with the surrounding areas.

Azem added that the invasion was carried out y dozens of soldiers, who were also deployed on the town’s entrances and main roads, including the road leading to the archeological site.

The soldiers also forced all Palestinian stores to close and prevented the residents from entering the area.

The invasion was carried out in preparation for allowing large groups of colonialist settlers to tour the site.

The army soldiers frequently invade Sebastia to accompany groups of colonialist settlers into the archeological area in Sebastia.