Soldiers Confiscate A Truck, Force Farmers Out Of Their Lands, In Tubas 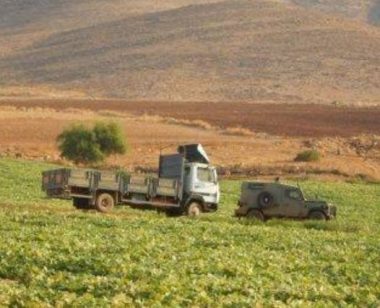 Israeli soldiers illegally confiscated, Wednesday, a Palestinian truck in the ar-Ras al-Ahmar area, south of Tubas, in northeastern West Bank, and forced many villages out of their farmlands. The army also invaded many villages, west of Jenin, in the northern part of the West Bank.

Media sources in Tubas said the soldiers stopped the driver, Ammar Wakhayma, and confiscated his truck, loaded with fresh fruits and vegetables.

The soldiers also invaded many farmlands in the area, and forced the Palestinians out.

In related news, the soldiers invaded the villages of Rommana, Taybeh and ‘Aneen, west of Jenin, leading to clashes with local youngsters, who hurled stones at them, especially in Taybeh. There have been no immediate reports of injuries or abductions.