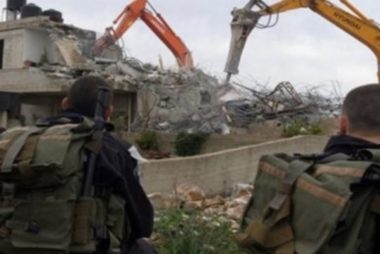 Israeli soldiers demolished, Thursday, a Palestinian home in al-Ferdis village, in the Eastern Bedouin area, east of Bethlehem, south of occupied Jerusalem in the West Bank.

Hasan Breijiyya, the head of the Colonization and Wall Resistance Commission in Bethlehem, said the soldiers invaded the village, and demolished a one-story, 130 square/meter home, owned by Hazem Hashem Abu Mheimeed.

The army claimed that the home was not licensed by the so-called Civil Administration office, the administrative branch of Israel’s illegal military occupation of the West Bank.

Breijiyya added that the soldiers also invaded and ransacked another home of the village, before withdrawing.