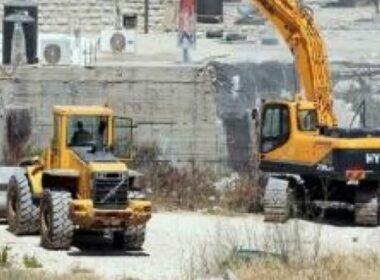 Israeli soldiers invaded, Wednesday, the towns of Hizma and al-Judeira, near occupied East Jerusalem in the West Bank, and demolished an under-construction wall, in addition to handing military orders for the destruction of several structures.

The owner, Bashar Abu Khalil, said he built the wall in the year 2017, to protect his land, but the City Council in Jerusalem, refused to grant him a license, although it was built on his private property.

In addition, the soldiers invaded the Wad Hasan area, in the al-Judeira town, and handed Suleiman Azzam a military order for the demolition of a pool.