Army Injures Many Palestinians During A Conference Against Annexation, Near Ramallah 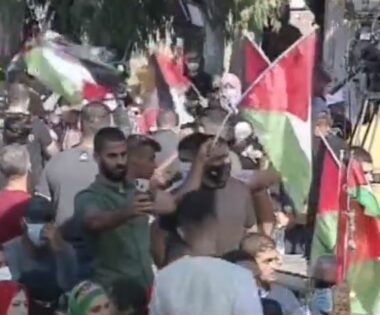 Israeli soldiers attacked, Wednesday, dozens of Palestinians participating in the Fourth National Conference against the illegal Annexation and Normalization, in Tormos-Ayya town, north of the central West Bank city of Ramallah, causing many to suffer the effects of teargas inhalation.

Media sources said dozens of soldiers surrounded the town, since morning hours Wednesday, to prevent the Palestinians from holding the conference against the illegal Israel colonial annexation of vital areas of the West Bank.

They added that the army then invaded the town, and fired a barrage of gas bombs and concussion grenades, causing many Palestinians to suffer the effects of teargas inhalation.

Despite the invasion and the excessive use of force by the army, the Palestinians still managed to hold the conference, which was also attended by including many political national leaders, in addition to senior Christian priests and Muslim Imams.

They also strongly condemned the normalization agreement between Israel, the state the occupies Palestine and oppresses its people, and the United Arab Emirates.

On Wednesday at dawn, Israeli soldiers abducted eighteen Palestinians, including one woman, in several parts of the occupied West Bank.

Also Wednesday, the soldiers demolished an under-construction wall and handed military orders targeting several structures, in the towns of Hizma and al-Judeira, near occupied East Jerusalem.