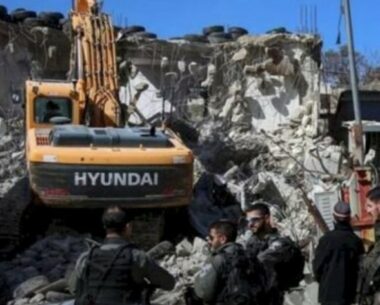 On Tuesday, Israeli soldiers demolished an agricultural shed and a room in the al-Fakheet village in Masafer Yatta, south of Hebron, in the southern part of the occupied West Bank.

Local sources said the soldiers, accompanied by bulldozers and heavy vehicles, invaded the area before demolishing an agricultural shed and a room owned by Fuad al-Amour, the Protection and Steadfastness Committees coordinator in Southern Hebron.

Al-Amour said the attack in the area is not the first but is part of the dozens of similar Israeli violations, targeting the Palestinians and their property, including the repeated attack by the colonialist settlers, to force the Palestinians to leave their lands for the benefit of the illegal colonialist activities.

The soldiers closed the entire area during the invasion and installed roadblocks preventing the Palestinians from crossing.

In related news, the soldiers installed an iron gate at the main western entrance of Beit Fajjar town, south of Bethlehem.

Beit Fajjar has been subject to constant invasions and violations, including the Tuesday dawn abduction of two children, Mohammad Rafat Deeriyya, 16, and Saqer Mohammad Taqatqa, 16, who were among eighteen Palestinians taken by the soldiers at dawn, in several parts of the West Bank.