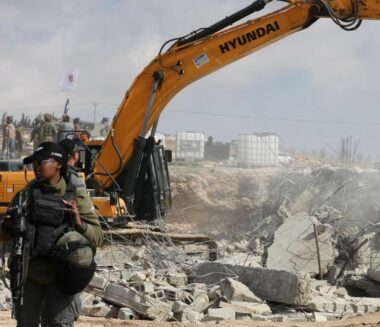 On Tuesday, Israeli soldiers demolished a well and an under-construction home, and abducted the owner in Khallet al-Mayya, south of Hebron, in the southern part of the occupied West Bank.

Rateb Jabour, the National and Popular Committees against the Annexation Wall and Colonies coordinator, said the soldiers demolished a water well and a 200 square/meter under-construction home in Um ash-Shaqhan area in Khallet al-Mayya.

Jabour added that the soldiers assaulted the home’s owner, Kamel Hussin Abu Hussin, 58, abducted him after demolishing his property.

Also Tuesday, the soldiers demolished a shed and an agricultural room in the al-Fakheet village in Masafer Yatta, south of Hebron.