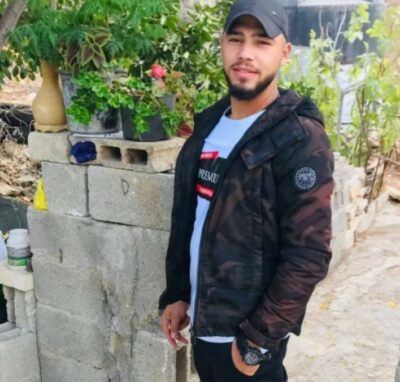 On Tuesday afternoon, Israeli soldiers killed a young Palestinian man after shooting him with live fire in Nabi Saleh village, northwest of Ramallah, in the central part of the occupied West Bank.

Media sources said the young man from Kafr Ein nearby village was shot in the abdomen and was rushed to the Istishari Hospital in Ramallah but succumbed to his serious wounds.

The slain young man was later identified as Nihad Amin Barghouthi, 24, who was also a former political prisoner, and a while back was shot and injured by the soldiers. His father is a retired Palestinian Intelligence officer.

An off-duty medic who lives nearby told Quds News Network (QNN) that the young man was not among the protesters but was walking in the area when the soldiers fired two rounds at him, hitting him with one.

“I rushed to help him and tried to talk to him, but he wasn’t alert, although he was still conscious…” the medic said, “We live in a village, no medical center or a hospital nearby, and then some Palestinians rushed to help before we took him in a civilian car to the hospital…”

He added that the army fired many live rounds, rubber-coated steel bullets, gas bombs, and concussion grenades at the Palestinians, causing several injuries.

In addition, the soldiers caused many Palestinians to suffer the effects of tear gas inhalation after the army invaded the area surrounding the Al-Quds University in Abu Dis town, southeast of the occupied capital, Jerusalem.

The invasion was carried out after the students organized a nonviolent procession in solidarity with the Palestinians Sheikh Jarrah neighborhood in Jerusalem, subject to seriously escalating violations by the soldiers and the colonialist settlers.

In related news, the soldiers attacked protesters in the Bab az-Zawiya area, in the center of Hebron city, in the southern part of the occupied West Bank.

Eyewitnesses said the soldiers invaded the area, fired many concussion grenades and gas bombs at Palestinians who protested the attack and added that the army forced all stores to close.

Earlier Tuesday, the soldiers injured many Palestinians in the al-‘Arroub refugee camp, north of Hebron.