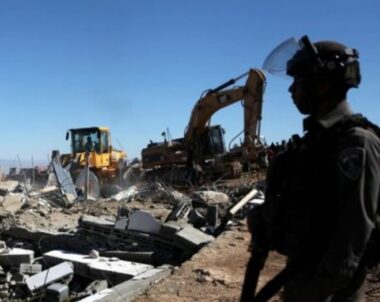 Israeli soldiers demolished, Thursday, the foundations of a Palestinian home in Beit Jala city, west of Bethlehem, south of occupied Jerusalem in the West Bank.

Breijiyya added that the soldiers then demolished the foundations of a home, owned by Nicola Awad, on his land.

The Israeli army claimed the property, licensed by the Local Council, “did not receive a construction permit from the Israeli Civil Administration Office.”

Be’er ‘Owna is subject to constant Israeli violations, which include the demolition of homes and other property, in addition to repeated halt construction orders, as Israel wants to use the lands for its illegal policies of construction and expansion of its colonies.