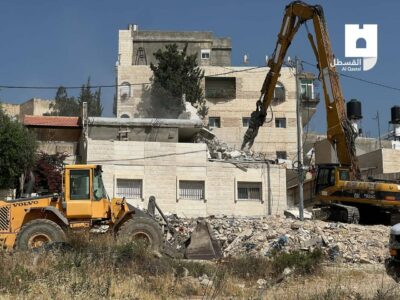 On Wednesday, Israeli soldiers demolished the home of a wheelchair-bound Palestinian man and his family in the al-Isawiya town in occupied Jerusalem for the fifth time since 1999.

The soldiers invaded the town and surrounded the home of Hatem Abu Ryala before forcing the family out and demolishing the property.

Hatem said his home was first demolished in 1999 and added that he has been paying excessively high fines and fees to the City Council in occupied Jerusalem, trying to get all the necessary permits and documents.

He paid dozens of thousands of Shekels in fines and legal fees and has a case that was still pending, awaiting a decision from the court today, but the army went ahead anyway and demolished the property. 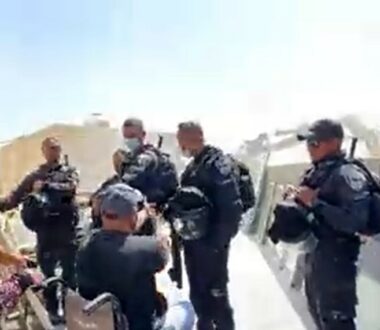 During the demolition of his home, the soldiers assaulted him and his family, fracturing the army of one of his children.

The 200 square/meter home provided shelter to the Palestinian and eight family members.

Hatem told the Palestine TV that the soldiers also previously destroyed his wheelchair ramp and the street leading to his home several times.

It is worth mentioning that when the soldiers demolished his home for the first time in the year 2009, the soldiers assaulted him and his family and caused him to fall from a high altitude, an issue that led to paralysis due to fractures in his spinal cord.

“They don’t want us here, in Jerusalem, but despite our suffering and my constant struggle and personal difficulties, we are here to stay,” Hatem said, “My family is scattered, displaced, and attacked. However, we have no other option. This is our home, our land….”