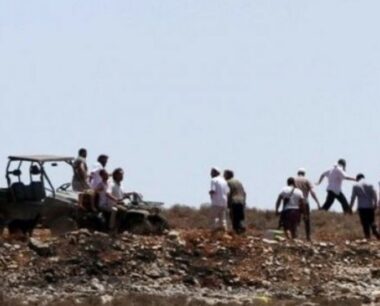 HEBRON, Wednesday, June 01, 2022 (WAFA) – Israeli settlers today beat Palestinian herders and destroyed their crops in the al-Jawaya community in the southern West Bank district of Hebron, according to a local activist.

Rateb Jabour said that settlers, under military protection, assaulted Palestinian herders in al-Jawaya, one of the communities making up Masafer Yatta, and prevented them from reaching their pastures at gunpoint.

The settlers also grazed their cattle on wheat and barley crops cultivated by Palestinian farmers in the area.

Recently, Israel’s top court gave the army the green light to forcibly expel some 1,300 Palestinians living in twelve villages or hamlets making up the Masafer Yatta area, which relies heavily on animal husbandry as the main source of livelihood, marking one of the largest expulsions carried out by the State of Israel in recent decades.

It has been designated as a closed Israeli military zone for training since the 1980s and is accordingly referred to as Firing Zone 918.

Israeli violations against the area include the demolition of animal barns, homes and residential structures. Issuance of construction permits by Israel to local Palestinians in the area is non-existent.