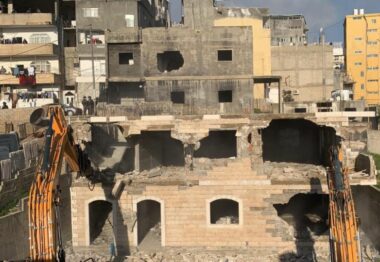 Israeli soldiers demolished, Wednesday, a Palestinian home in Shu’fat refugee camp, in addition to a shed and a storage room in the nearby Ras Khamis neighborhood, in occupied Jerusalem.

They added that the soldiers also demolished a storage room and a shed, owned by a member of the Gheith family, in addition to attacking several Palestinians and abducting one.

The demolitions were carried out under the pretext that the buildings were constructed without permits from the City Council in occupied Jerusalem.