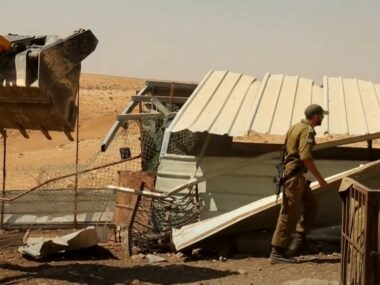 Israeli soldiers demolished, Wednesday, a Palestinian home, a well, and agricultural structures east of Yatta town, south of Hebron, in the southern part of the occupied West Bank.

The well was in Fakhri’s land, in Area C of the occupied West Bank, and was used for irrigation.

Also in Khallet ad-Dabe’, the soldiers demolished three residential sheds, owned by members of the Dababsa family, and attacked many residents, wounding Ali Amer Dababsa in his leg before he was moved to a local hospital.

Al-Amour added that the soldiers also demolished an agricultural shed, owned by Akram Abu Sabha, in the al-Fakheet area, east of Yatta. The shed was previously demolished once before he rebuilt it.