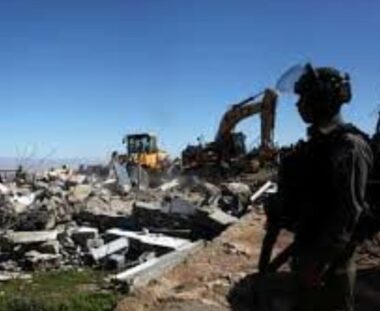 Israeli soldiers demolished, Wednesday, an under-construction home near Salfit, in central West Bank, and a shed near occupied Jerusalem.

Media sources in Salfit said the soldiers invaded the northwestern area of Bruqin town, west of the city, and demolished an under-construction home.

They added that the home, owned by Mousa Amad Abu Tabeekh, was 70 square/meters; the army alleged it was built without a permit from the “Civil Administration Office,” although it was financed by the local town council.

In addition, the soldiers invaded Sur Baher town, in occupied Jerusalem, and demolished a shed.

Local sources said several army jeeps invaded the town, before demolishing the property without prior notice.