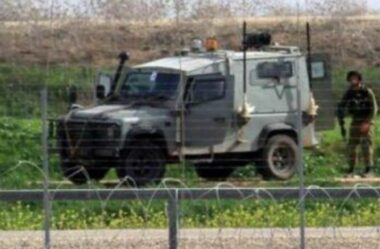 Israeli soldiers fired many live rounds, on Tuesday morning, into Palestinian farmlands in the al-Qarara town, north of Khan Younis, in the southern part of the besieged Gaza Strip.

Eyewitnesses said the soldiers fired the live rounds at the Palestinian farmers while working on their lands, near the perimeter fence.

They added that the shots came from the military towers across the fence, and stated that the farmers had to leave their lands in fear of further violations.

In the West Bank, the soldiers abducted, on Monday at night and Tuesday morning, five Palestinians from several parts of the West Bank, including one from the occupied capital, Jerusalem.