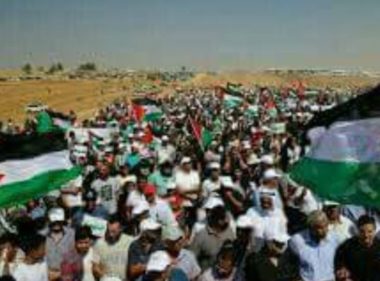 Israeli soldiers shot, Friday, 14 Palestinians, including ten with live ammunition, during protests on Palestinian lands east of Jabalia city, in the northern part of the besieged coastal region.

The Palestinian Health Ministry has reported that the soldiers, stationed in their fortified sniper towers across the perimeter fence, shot ten Palestinians with live fire.

They added that four other Palestinians were shot with rubber-coated steel bullets, and many others suffered the effects of teargas inhalation.

In addition, the soldiers fired an artillery shell into two areas east of the al-Boreij refugee camp, and al-Maghazi, causing damage.

The Israeli Air Force also fired missiles into lands, east of Rafah, in southern Gaza Strip, causing damage, including in nearby homes and structures.

Furthermore, Israeli war jets fired a missile into a site, east of the Sheja’eyya neighborhood, in Gaza city.

The Israeli army claimed it was retaliating to three shells, reportedly fired from Gaza, into open areas in nearby settlements; no damage or injuries were reported.

Earlier Friday, the Palestinian Health Ministry has reported that a child, identified as Ala’ Hani al-‘Abbassi, 15, died from serious wounds he suffered in mid-October of 2019, after Israeli soldiers shot in southern Gaza.