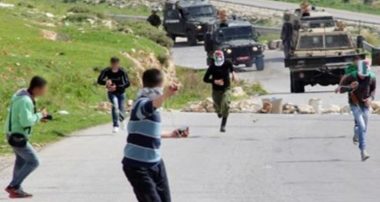 Israeli soldiers shot, Tuesday, two Palestinians with live fire and 71 with rubber-coated steel bullets, in addition to causing approximately 100 to suffer the effects of teargas inhalation, and abducted two others, in Nablus governorate, in the northern part of the West Bank.

Medical sources said the soldiers attacked hundreds of protesters, who marched in the al-Lubban ash-Sharqiya village, and near Huwwara military roadblock, south of Nablus, marking the Palestinian Nakba, and the ongoing illegal Israeli occupation of Palestine.

The soldiers also attacked protesters in Beita village, south of Nablus, in addition to Azmout and Beit Forik, east of Nablus, and Deir Sharaf, west of the city.

Ahmad Jibreel, the head of the Emergency Unit of the Red Crescent Society, said the soldiers shot two Palestinians with live fire, and 69 others with rubber-coated steel bullets, in addition to causing approximately 100 to suffer the effects of teargas inhalation.

The soldiers also abducted Mohammad Nubani, 23, and Kamal ‘Oweiss, and took them to an unknown destination.

In related news, the soldiers attacked dozens of nonviolent protesters in Budrus village, northwest of the central West Bank city of Ramallah, after the army attacked a symbolic “Right of Return Camp,” causing several injuries.

Many Palestinians then gathered in the area, before the soldiers invaded it and fired several live rounds and gas bombs at them.