Soldiers Injure A Palestinian Near Jenin 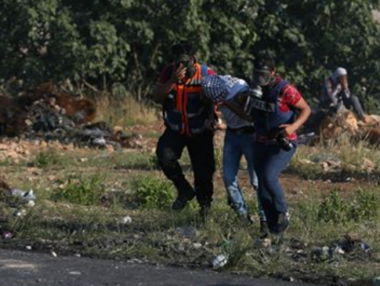 Israeli soldiers injured, Saturday, a young Palestinian man near Ya’bad town, southwest of the northern West Bank city of Jenin.
Media sources said the soldiers invaded an area near Ya’bad town, and fired rubber-coated steel bullets, at the young man while chasing him.

They added that the young man, identified as Lu’ay Mohammad Abu Rmeila, was shot in his leg, and was moved to Jenin Governmental Hospital.

In Ramallah, in central West Bank, the soldiers resorted to the excessive use of force against nonviolent protesters marching near Ofar prison, west of the city of Ramallah, to express solidarity with hunger-striking detainees.

In addition, the soldiers abducted three young Palestinian men in the al-‘Isawiya town, in occupied East Jerusalem, and summoned for interrogation, one Palestinian from Silwan town.