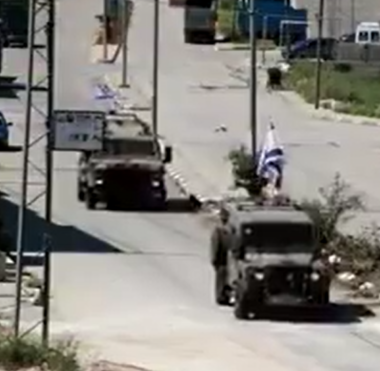 Israeli soldiers resorted, Saturday, to the excessive use of force against nonviolent protesters marching near Ofar prison, west of the central West Bank city of Ramallah, to express solidarity with hunger-striking detainees.

The procession started from Birzeit University, after being organized by various student blocks, and was attended by dozens of students.

The soldiers attacked the protesters and fired a barrage of gas bombs at them, causing dozens to suffer the effects of teargas inhalation.

At least seven detainees, including one woman, are ongoing with the hunger strike in various Israeli prisons.

One of them is Samer al-Arbid, who was referred to Hadassah Hospital in Jerusalem due to the serious deterioration of his health condition while being interrogated and tortured by the Israeli Security Agency (Shin Bet).

It is worth mentioning that detainee Ahmad Ghannam, 42, from Doura city, south of the southern West Bank city of Hebron, is ongoing with the hunger strike for the 83rd consecutive day, and is facing serious health complications.

There are around 5700 Palestinians, including 230 children and 48 women, who are currently imprisoned by Israel.

500 of the detained Palestinians are held under the arbitrary Administrative Detention orders without charges or trial, and 1800 who are facing health complications, including 700 who need urgent specialized medical treatment but are denied access to the services they so desperately require.

In addition, the soldiers abducted three young Palestinian men in the al-‘Isawiya town, in occupied East Jerusalem, and summoned for interrogation, one Palestinian from Silwan town.