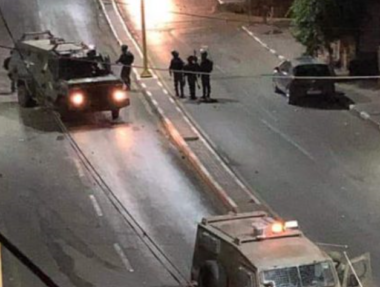 Israeli soldiers injured, on Saturday evening, at least twenty Palestinians in Azzoun town, east of the northern West Bank city of Jenin, and caused a fire in one home.

Media sources in Azzoun said several army jeeps invaded the town and fired a barrage of gas bombs and concussion grenades at Palestinians who protested the invasion.

They added that at least twenty Palestinians suffered the effects of teargas inhalation and received the needed treatment by medics without the need for hospitalization.

The soldiers fired several gas bombs near and at a few homes, one of them, owned by Dr. Mohammad Matar, was directly struck with the bombs and caught fire in its furniture, before locals and Civil Defense teams rushed to the property and started extinguishing the fire.

In related news, the soldiers injured a young man near Ya’bad town, southwest of the northern West Bank city of Jenin.

In Ramallah, in central West Bank, the soldiers resorted to the excessive use of force against nonviolent protesters marching near Ofar prison, west of the city of Ramallah, to express solidarity with hunger-striking detainees.

In addition, the soldiers abducted three young men in the al-‘Isawiya town, in occupied East Jerusalem, and summoned for interrogation, one Palestinian from Silwan town.