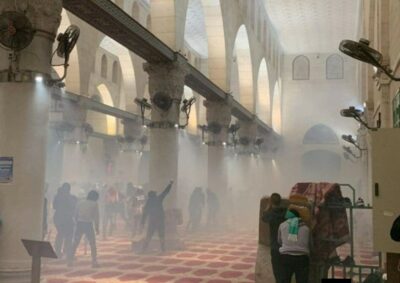 Updated: Israeli soldiers injured, Friday dawn, at least ninety Palestinians, mainly to the upper body, including at least two who suffered serious wounds, in the courtyards of the Al-Aqsa Mosque, in the occupied Palestinian capital, Jerusalem, in the West Bank.

Update: The Palestinian Red Crescent Society (PRCS) said the number of injuries is at least ninety Palestinians, including many medics and journalists.

At least two of the wounded suffered life-threatening injuries, including eight who are in the Intensive Care Unit at the al-Makassed Hospital in Jerusalem.

It stated most injuries are in the upper body and added that at twenty-seven Palestinians have been transferred to a few Palestinian hospitals and medical centers, in East Jerusalem.

The soldiers also shot and assaulted many Palestinian journalists, shooting one with a rubber-coated steel bullet in the head, and causing a fracture in the arm of another journalist.

The soldiers also invaded and ransacked the Al-Aqsa Mosque clinic and attacked many Palestinians.

The soldiers chased and assaulted many worshipers with batons in the courtyards of Al-Aqsa and closed all gates leading to the holy site in addition to isolating the al-Qibli Mosque without allowing the worshipers to leave.

Many injuries were reported in the al-Qibli Mosque after the soldiers smashed some of its windows and hurled gas bombs and concussion grenades into it.

The invasion and attack started when dozens of worshippers nonviolent marched in the courtyards of the holy site to condemn the seriously escalating Israeli violations and the plans by illegal colonizers to invade it.

They added that the soldiers fired a barrage of rubber-coated steel bullets, gas bombs, and concussion grenades at the worshipers, wounding at least fifty-nine, including one in critical condition.

Most of the wounded were injured in the upper body, especially after the soldiers attacked them with batons, the PRCS added.

The Israeli occupation army and the police also closed all gates leading to the holy sites, except for Bab Hotta, which the soldiers used during the invasion into the holy site.

The soldiers also caused damage to many windows of the Al-Qibli Mosque in the al-Aqsa compound after firing gas bombs and concussion grenades into it to force the worshipers out.