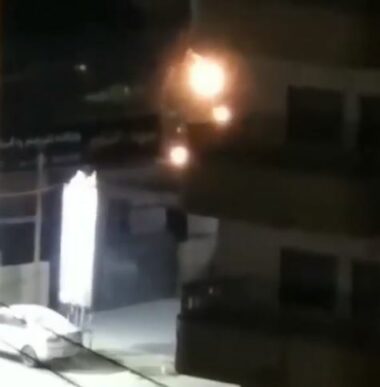 Israeli soldiers invaded, on Tuesday evening, Kafr Aqab town, north of occupied East Jerusalem, and injured dozens of Palestinians, in addition to demolishing a storage room and bulldozing lands. The army also abducted a young man from the Old City.

The Palestinian Red Crescent Society (PRCS) has reported that its medics provided treatment to eleven Palestinians who were shot with rubber-coated steel bullets, and 31 who suffered the severe effects of teargas inhalation.

The incidents took place after many armored military vehicles, and a bulldozer, invaded the town, before the soldiers attacked Palestinian protesters with a barrage of gas bombs, concussion grenades, and rubber-coated steel bullets.

The PRCS said the soldiers shot eleven Palestinians with rubber-coated steel bullets, including one who was shot in the head and suffered a moderate wound.

It added that its medics also provided treatment 31 Palestinians who suffered the severe effects of teargas inhalation, including some who fainted.

During the invasion, the soldiers declared the al-Matar neighborhood a closed military zone, preventing the Palestinians from entering or leaving it, before demolishing a storage room, and uprooting a land, owned by a local man, identified as Saleh al-Hittawi.

The soldiers also threatened to demolish many stores and rooms in the neighborhood.

In related news, the soldiers invaded the al-Wad street, in the Old City of occupied Jerusalem, searched homes and abducted Issa al-Firawi, 20.