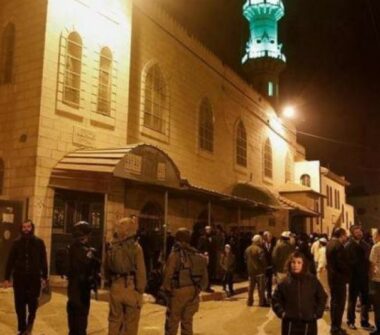 Israeli soldiers injured, Tuesday dawn, dozens of Palestinians during protests that took place after many illegal Israeli colonizers invaded a mosque and removed the Palestinian flags, in addition to destroying some of its windows and firing live rounds at its minaret, in Halhoul town, north of the southern West Bank city of Hebron.

Media sources said dozens of soldiers invaded Halhoul to accompany the illegal colonizers who invaded the Nabi Younis Mosque before smashing and destroying its windows and doors, and firing live rounds at its minaret, in addition to removing Palestinian flags.

The invasion was carried out by many army jeeps in addition to fifteen Israeli buses and more than twenty cars.

Medical sources in Hebron said the soldiers shot one Palestinian with live rounds in the leg and foot, and at least two others with rubber-coated steel bullets; the wounded were rushed to hospitals in Hebron.

Palestinian medics also provided treatment to scores of Palestinians who suffered the effects of tear gas inhalation, cuts, and bruises.

The Israeli army also invaded the Waqf and Endowment building adjacent to Nabi Younis Mosque, in addition to the Al-Amal Kindergarten and School and the Zakat Halhoul building.