Soldiers Injure Many Palestinians As Hundreds Of Colonizers Invade Al-Aqsa 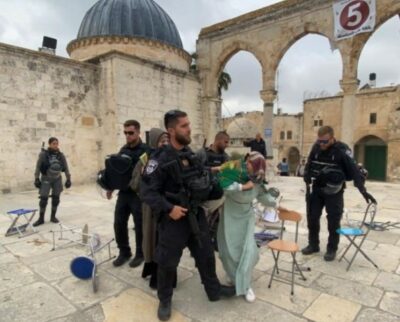 On Tuesday, Israeli soldiers injured many Palestinians after the army accompanied hundreds of colonizers into the Al-Aqsa Mosque compound in the occupied Palestinian capital, Jerusalem, in the West Bank.

They added that the soldiers invaded al-Qibli Mosque after assaulting and forcing the worshipers out, and occupied its rooftop.

The soldiers also abducted at least three Palestinians and took them to an interrogation facility in the occupied city.

The attacks targeted dozens of young men, in addition to women and elders in the yards of the holy compound. The Maan News Agency said six hundred colonizers, accompanied by soldiers and police officers, invaded the courtyards of the holy site in thirteen groups that came from the area of the al-Magharba Gate.

It is worth mentioning that the invasions in large numbers of soldiers, police, and the colonizers, started Sunday and were conducted by more than 1728 colonizers.

The Israeli army also issued orders barring all young Palestinian men, below the age of twenty-five, from entering the Mosque and its surrounding areas after installing many roadblocks.

Over the past four days, the Israeli army and the police injured more than two hundred Palestinians, including women and children, and abducted at least six hundred.

Just outside the Old City, near the Damascus Gate on Wednesday, Israeli troops assaulted a young Palestinian woman, according to the Times of Gaza, which published this video on their Twitter feed:

Israeli occupation forces intimidate a Palestinian girl as they brutally assault her in Jerusalem. pic.twitter.com/cv4qMtz6XH