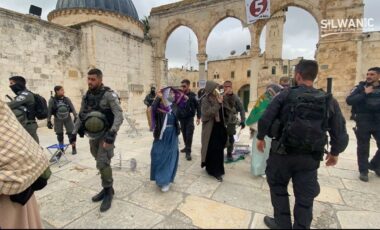 On Wednesday, Israeli soldiers abducted eight Palestinians and injured at least six from several parts of the occupied capital, Jerusalem, in the occupied West Bank.

Media sources said the soldiers abducted a young man in front of Bab Hutta, leading to the Al-Aqsa Mosque.

The Palestinian has been identified as Zeid Abu Sneina from Silwan town, south of Al-Aqsa.

In the Old City, the soldiers also assaulted a young man, who remained unidentified at the time of this report, and abducted him. Furthermore, the army abducted a schoolteacher and three of his students near Bab Hutta and took them to an interrogation facility.

In related news, fanatic Israeli colonizers, headed by Member of Knesset Itamar Bi-Gvir, held a provocative march in Bab al-Amoud and various parts of the Old City while Israeli soldiers attacked many Palestinians tried to remove them from the area.

The procession led to protests before the soldiers assaulted many Palestinian, including women and children, and abducted a young man in Bab al-‘Amoud.

In addition, the soldiers attacked street vendors selling sweets and other food products and destroyed their stands after spilling their products on the ground, the Wadi Hilweh Information Center In Silwan (Silwanic) said.