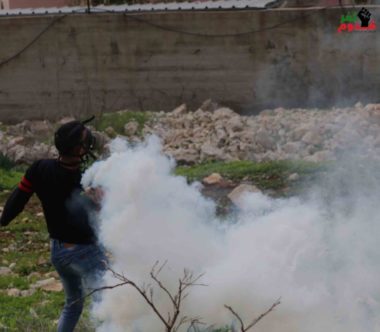 The Popular Committee against the Annexation Wall and Colonies in Kufur Qaddoum, said the Palestinians, accompanied by international and Israeli peace activists, marched from the center of the village while chanting against the ongoing illegal Israeli occupation of Palestine, its colonies and escalating violation.

They also chanted against the so-called “Deal of the Century,” which strips the Palestinians of their fundamental rights of sovereignty, independence, and self-determination, in addition to ignoring all related United Nations and Security Council resolutions.

Several Palestinians suffered the effects of teargas inhalation and received the needed treatment.