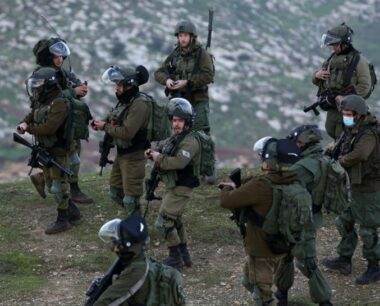 Israeli soldiers injured, Friday, many Palestinians during a nonviolent procession against the illegal colonies in Beit Dajan village, east of the northern West Bank city of Nablus.

Local sources said the Palestinians marched towards their lands which Israel intends to illegally annex for the construction of its illegal colonies.

They added that the soldiers fired many live rounds, in addition to rubber-coated steel bullets, gas bombs, and concussion grenades.

Many Palestinians suffered the severe effects of teargas inhalation, and others sustained cuts and bruises.

Beit Dajan holds weekly processions after Israel announced the illegal annexation of large areas of farmlands for the benefit of the colonies, built in direct violation of International Law.