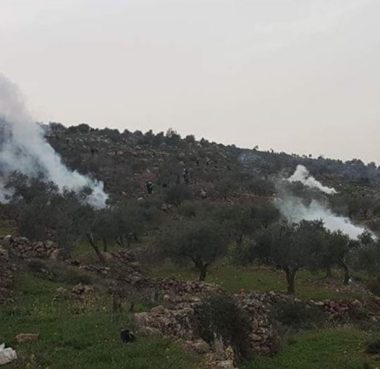 Israeli soldiers attacked, Friday, dozens of Palestinian nonviolent protesters in Beita village, south of the northern West Bank city of Nablus, and injured many, including one child.

The Palestinians nonviolently marched in Sbeih Mountain, south of the city, protesting a new illegal colonialist outpost, which was recently installed by Israeli colonizers on Palestinian lands.

Ahmad Jibril of the Red Crescent Society in Nablus, said the soldiers shot a young man, identified as Hatem Bodeir, with a rubber-coated steel bullet in his chest, before he was rushed to Rafidia hospital.

He added that the soldiers shot a child, identified as Mohammad Hamada Jaghoub, with a gas bomb in his head; he was also rushed to Rafidia hospital.

Medics also provided treatment to many Palestinians, who suffered the effects of teargas inhalation.

On Thursday, dozens of Palestinians marched in the same area, and planted olive samplings.

Furthermore, the soldiers attacked dozens of nonviolent protesters, and abducted a teenage boy, in the Old City of Hebron, in the southern part of the West Bank.

In related news, the soldiers shot one Palestinian with live fire, and another with a gas bomb in his face, in addition causing dozens to suffer the severe effects of teargas inhalation, after the army resorted to the excessive use of force against dozens of residents who marched in the al-Mazra’a al-Gharbiyya village, northwest of Ramallah, protesting the illicit confiscation of Palestinian lands to pave a new road for illegal colonies.