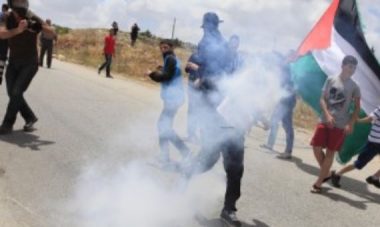 Israeli soldiers shot, Friday, one Palestinian with live fire, and another with a gas bomb in his face, in addition causing dozens to suffer the severe effects of teargas inhalation, after the army resorted to the excessive use of force against dozens of residents who marched in the al-Mazra’a al-Gharbiyya village, northwest of Ramallah, protesting the illicit confiscation of Palestinian lands to pave a new road for illegal colonies.

The WAFA Palestinian News Agency said the soldiers resorted to the excessive use of force against the nonviolent protesters, and fired dozens of gas bombs, concussion grenades, rubber-coated steel bullets and live rounds.

It added that one Palestinian was shot with a live round in his leg, and dozens suffered the severe effects of teargas inhalation.

Another Palestinian was shot with a gas bombs which directly stuck him in the face.

The army also attacked many Palestinian reporters, and tried to remove them from the area.

It is worth mentioning that the new road Israel is trying to pave on privately-owned Palestinian lands aims at linking unlawful colonialist outposts with the illegal colonies of Ateret, Halamish, Telmon and Nahle’el.

It would also cut off Ramallah from its suburbs, in addition to surrounding and isolating around 4000 dunams of Palestinian lands.