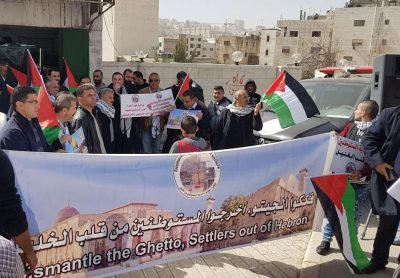 Israeli soldiers attacked, Friday, dozens of nonviolent Palestinian protesters, and abducted a teenage boy, in the Old City of Hebron, in the southern part of the West Bank.

The procession, which was organized by “Dismantle the Hebron Ghetto” campaign, was carried out demanding the removal of Israeli colonizers, living in illegal colonies and outposts in Hebron.

The soldiers started firing gas bombs and concussion grenades at the nonviolent protesters, just as they entered the Shallala Street area, causing dozens to suffer the severe effects of teargas inhalation.

Several Palestinian youngsters hurled stones at the soldiers, while some threw the gas bombs back at the army. 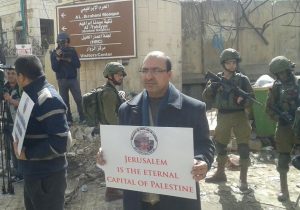 In addition, the soldiers abducted Ma’moun an-Natsha, 16, from Bab az-Zawiya area in the Old City, while he was walking back home in Tal Romedia.

It is worth mentioning that Ma’moun’s father was a political prisoner, who was released a week ago, after being held by Israel for 18 months.

Goldstein, a US-born Israeli military physician walked into the Ibrahimi mosque in Hebron armed with an assault rifle during the holy month of Ramadan, and hundreds of Palestinians were crammed inside, bowed in prayer, before he opened fire, killing 29, and wounding more than a hundred others.

In related news, the soldiers shot one Palestinian with live fire, and another with a gas bomb in his face, in addition causing dozens to suffer the severe effects of teargas inhalation, after the army resorted to the excessive use of force against dozens of residents who marched in the al-Mazra’a al-Gharbiyya village, northwest of Ramallah, protesting the illicit confiscation of Palestinian lands to pave a new road for illegal colonies.