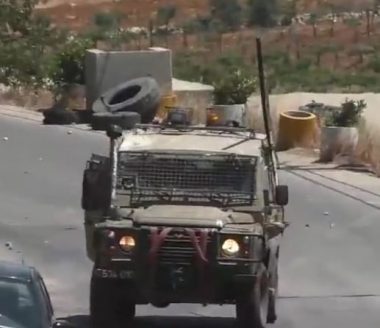 Several Israeli army jeeps invaded, on Thursday evening, the ath-Thaher area, in Beit Ummar town, north of the southern West Bank city of Hebron, and caused many Palestinians to suffer the effects of teargas inhalation.

Media sources in Hebron said the soldiers fired several gas bombs at Palestinians in the ath-Thaher area, after the army invaded it, causing many of them to suffer the effects of teargas inhalation.

The invasion appears to have been carried out at random, as there were no clashes in the area, and the Palestinians were just walking in their town.

Nevertheless, the ath-Thaher area witnesses frequent invasions, including ongoing assaults against the farmers on their own lands, in an attempt to occupy them to expand Karmie Tzur colony, which was built on illegally confiscated Palestinian lands.

Furthermore, the soldiers confiscated a garbage collection truck owned by the Joint Services Council for Solid Waste Management, from ‘Aqraba village, south of Nablus, in the northern part of the occupied West Bank.

It is worth mentioning that the soldiers abducted, overnight until Thursday at dawn, nine Palestinians, including a child, only nine years of age, in several parts of the occupied West Bank, the Palestinian Prisoners’ Society (PPS) has reported.