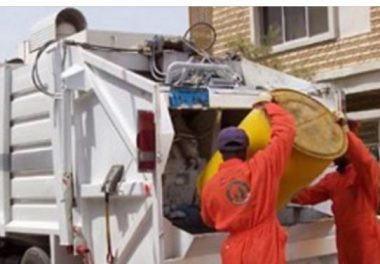 Israeli soldiers confiscated, Thursday, a garbage collection truck owned by the Joint Services Council for Solid Waste Management, from ‘Aqraba village, south of Nablus, in the northern part of the occupied West Bank.

Yousef Deeriyya, a member of the Popular Committee against the Wall and Colonies in Aqraba, said the soldiers chased the truck, and confiscated it, after collecting and burning the garbage the designated area in ad-Dowwa area, northeast of Aqaba.

The army said that the colonist settlers, living on illegally-confiscated Palestinian lands, “were annoyed by the noise.”

It is worth mentioning that Israel has been trying to prevent the Palestinians from using that area for the collection and disposal of garbage and trash, as it is trying to illegally confiscate it, for the benefit of the colonists.

Last August, the soldiers confiscated a garbage collection truck, owned by Qabalan Local Council, after stopping it near Aqraba.

It is worth mentioning that the soldiers abducted, overnight until Thursday at dawn, nine Palestinians, including a child, only nine years of age, in several parts of the occupied West Bank, the Palestinian Prisoners’ Society (PPS) has reported.