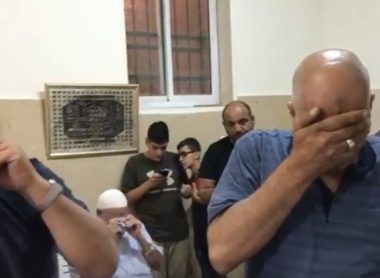 Israeli soldiers invaded, on Thursday evening, a mosque in the al-‘Isawiya town, in occupied Jerusalem, and fired gas bombs, causing at least three Palestinians to suffer the severe effects of teargas inhalation.

The Wadi Hilweh Information Center in Silwan (Silwanic) said the soldiers stormed the al-Arba’in Mosque in al-‘Isawiya, and fired several gas bombs at the worshipers.

Silwanic added that at least three worshipers suffered the severe effects of teargas inhalation, before they received the needed treatment by local medics.

The attack took place just after the local worshipers finished evening prayers in the mosque.

The soldiers also installed a roadblock at the main entrance of the town and started filming in the area.

In related news, the soldiers invaded Hamsa alt-Tihta area in the West Bank’s Northern Plains, before stopping many Palestinians and collected their personal information, and later withdrew from the area.