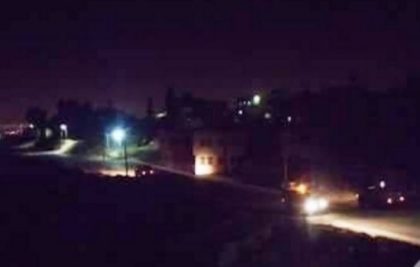 Israeli soldiers invaded, on Monday at dawn, Shoufa village, southeast of Tulkarem, in the northern part of the West Bank, and completely isolated it, after alleging that some Palestinians hurled stones at a car driven by a colonist Israeli settler, heading to a nearby colony.

The soldiers initiated an extensive search campaign against the village, and prevented the Palestinians from entering or leaving it. targeting many homes, broke into and searched many homes, leading to excessive property damage, especially in the Ras al-

The army broke into and searched many homes, leading to excessive property damage, especially in the Ras al-Aqra’ area, in the western part of the village.

The Israeli army said the settlers’ car sustained damage to the front shield, but reported no injuries. The car was driving to Avnei Hefetz illegal colony, built on Palestinian lands belonging to residents of Shoufa and Kafr al-Lobbad nearby town.

The Maan News Agency said the soldiers claimed that the attack took place near the western entrance of the village, and that the army threatened further severe measures and restrictions.

The army also refused to allow the villagers, who were out of the village, to return back to their homes, after declaring Shoufa a “closed military zone.”

Shoufa village is subject to frequent Israeli military invasions, and violations, especially since the army installed a roadblock at the main entrance of the village, nine months ago, and has been preventing any Palestinian, who is not from the village, from entering it.