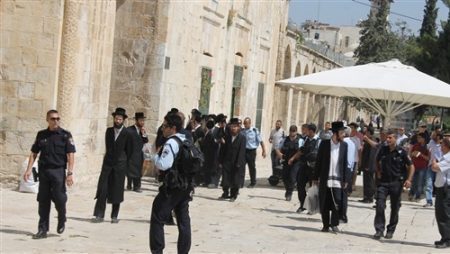 Jerusalemite sources reported, according to Al Ray Palestinian Media Agency, that the settlers broke into Al-Aqsa in small groups and carried out provocative tours in the courtyards, adding that photos were taken in several areas of the mosque, adding that Palestinian worshipers and students faced off the settlers with chanting and cries of “Allahu Akhbar!” (“God is Greatest!”)

The occupation reportedly seeks, through the storming of Al-Aqsa, to devote the temporal and spatial division of Al- Aqsa and to Judaize Jerusalem.

See 08/15/16 Israeli Media: Preparations for Construction of 3rd Temple to Begin for more info and links.