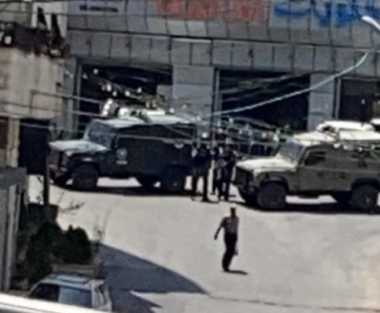 Local sources said several army jeeps invaded the western area of the city, especially the Nozha Street, after surrounding it.

They added that many Palestinians protested the invasion before the soldiers attacked them with gas bombs and concussion grenades.

The soldiers also closed several streets and prevented the Palestinians from crossing, in addition to stopping many residents, and interrogated them while inspecting their ID cards.

Late on Tuesday night and on Wednesday at dawn, Israeli soldiers abducted twenty-one Palestinians, including children, after the army invaded and searched dozens of homes across the occupied West Bank, including the occupied capital, Jerusalem, in addition to injuring three Palestinians, one seriously, in Tubas, in northeastern West Bank.