Soldiers Kidnap Five Palestinians, Including A Journalist And An Elderly Man 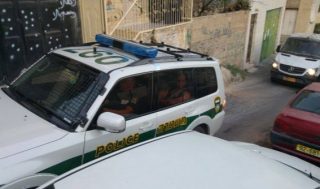 Israeli soldiers have kidnapped, Friday, five Palestinians, including a journalist and an elderly man, different parts of occupied Jerusalem.

The soldiers invaded the Sa’diyya neighborhood, in the Old City, and kidnaped a young man and an elderly man, before taking them to an interrogation center in the city.

The soldiers also kidnapped a young man, identified as Fuad al-Atrash, at one of the gates of the Al-Aqsa Mosque, in addition to abducting Anas al-Kiswani in Shu’fat neighborhood.