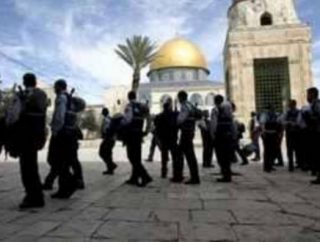 Israeli soldiers kidnapped, on Tuesday morning, four workers of the Waqf and Islamic Affairs Department, in the Al-Aqsa Mosque in occupied Jerusalem, after ordering them to stop maintenance work in the Dome of the Rock. Soldiers and extremists also stormed the courtyards of the mosque.

The Waqf Department said the soldiers kidnapped the head of the Reconstruction Committee Bassam al-Hallaq, in addition to work supervisor Issa Salhab, and two workers identified as Baha’ Abu Sbeih and Saed Abu Sneina, and took them to an interrogation center in Jerusalem.

The Department stated that the soldiers ordered the workers to stop all rehabilitation and maintenance work in the Dome of the Rock, but the workers refused to do so while al-Hallaq told them that this work falls solely under the Jurisdiction of the Ministry of Waqf and Islamic Affairs.

In related news, dozens of soldiers and Israeli extremists stormed the courtyards of the Al-Aqsa Mosque, after the army assaulted the guards and many Muslim worshipers, in order to facilitate the provocative tour into the holy site.

The attack comes only one day before the so-called “Temple Destruction Anniversary,” while many extremist Israeli groups are organizing massive marches into the Al-Aqsa, starting on Thursday.

Furthermore, the Palestinian Prisoners Society (PPS) has reported that Israeli soldiers have kidnapped, on Tuesday evening at dawn Wednesday, ten Palestinians, including children, in al-Isawiyya and Silwan towns, and the at-Tour village, in occupied East Jerusalem.

The Jenin office of the PPS has reported that Israeli soldiers kidnapped, on Wednesday at dawn, three Palestinians from Jenin and Nablus.

In addition, the army kidnapped three Palestinians, including a child, in different parts of the southern West Bank district of Hebron, seriously wounded one resident and injured another near Tubas.