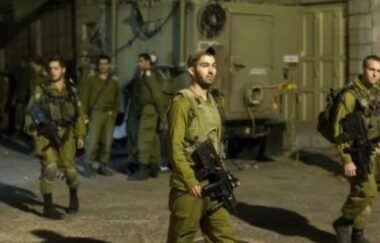 Israeli soldiers abducted, on Wednesday at dawn, a senior political leader of the Islamic Jihad Movement, along with his nephew, and injured three other Palestinians in the Jenin refugee camp, in the northern West Bank city of Jenin.

Media sources said the soldiers abducted Sheikh Bassam Sa’adi, 61, a senior political leader of the Islamic Jihad movement, and his nephew, Qassem Sa’adi, 29, after storming their homes and ransacking them in Jenin refugee camp.

They added that the soldiers wired and detonated the main doors of the two homes after surrounding them, and forced the members of each family in one room in their homes, before violently searching the properties.

The invasion was carried out by more than 30 military vehicles that first gathered at the main entrance of the refugee camp.

Local sources said some armed resistance fighters engaged in a brief exchange of live fire with the invading soldiers.

It is worth mentioning that Sheikh Sa’adi is a former political prisoner who was repeatedly abducted and imprisoned by the army, spending more than 13 years in Israeli prisons, including two years he served in prison before his release in February of the year 2020.

Many years ago, Israeli soldiers killed his twin sons, Ibrahim, and Abdul-Karim Sa’adi, in addition to his mother, Bahja, and his nephew, Bassam Ghassan Sa’adi.

All his living sons, his wife, and most of his relatives have been frequently abducted and imprisoned by Israel.