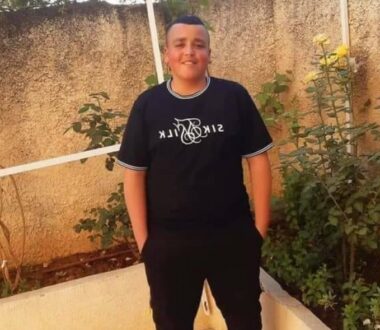 They added that the soldiers shot Yamen Nafez Jaffal, 16, with a live round and prevented Palestinian medics from approaching him, and he subsequently bled to death. The soldiers later took his corpse away.

Eyewitnesses said the soldiers fired many gas bombs at the Palestinian ambulance and the medics, forcing them away and causing many Palestinians to suffer the effects of tear gas inhalation.

The Israeli army claimed the slain child hurled a Molotov cocktail at Israeli military vehicles invading Abu Dis before the soldiers fatally shot him and added that the soldiers also fired live rounds at another Palestinian who managed to escape unharmed.

The soldiers also invaded and ransacked a home in the town, causing damage, before adducting a young man, identified as Majd Warni.

In related news, the soldiers invaded the at-Tour town, in East Jerusalem, before firing gas bombs and concussion grenades at Palestinians protesting the invasion.

On Sunday at dawn, Israeli soldiers killed Karim Jamal al-Qawasmi, 19, from the at-Tour town, in occupied Jerusalem, after shooting him near Bab Hutta gate, north of the Al-Aqsa Mosque.

Shadi Mitwer, the secretary of the Fateh Movement in occupied Jerusalem, said the Israeli escalation is a calculated ethnic cleansing of the Palestinians in the holy city.

“We are the natives of this holy city, and we are here to stay,” Mitwer said, “This escalation and these crimes will just push us to be more determined to continue our struggle until liberation and independence.”