Soldiers Injure Many Palestinians In Hebron; Colonizer Fires At Children 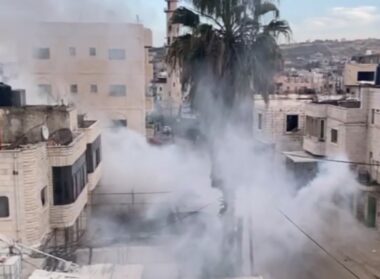 On Sunday afternoon, Israeli soldiers injured several Palestinians in the al-‘Arroub refugee camp, north of Hebron, in the southern part of the occupied West Bank.

Eyewitnesses said the soldiers closed the main gate of the refugee camp, preventing the Palestinians from entering or leaving it, and invaded the neighborhood close to Road #60, leading to protests.

They added that the soldiers fired many rubber-coated steel bullets, gas bombs, and concussion grenades at the Palestinians, causing several residents to suffer the effects of tear gas inhalation.

In related news, fanatic far-right Member of Knesset, Itamar Bin-Gvir, invaded the area along with several colonizers and threatened to kill Palestinian children after alleging they hurled stones at his car.

One of the colonizers, only known as Ofar, attacked Palestinian shops near the bypass road and tried to force them to close by, threatening to shoot the Palestinians. At the same time, Israeli soldiers only observed the violation without intervening.

In occupied Jerusalem, the soldiers killed one Palestinian, Karim Jamal al-Qawasmi, 19, near the Al-Aqsa Mosque.

After killing the young man, dozens of Israeli soldiers, police, and intelligence officers invaded his home and ransacked the property before abducting his mother, and his brother Mohammad, in addition to summoning the father for interrogation.