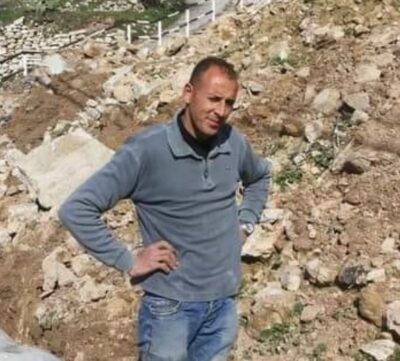 Israeli soldiers shot and killed, on Tuesday evening, a Palestinian man near Beita Junction, south of the northern West Bank city of Nablus. The incident led to protests before the soldiers injured at least 49 Palestinians.

Palestinian sources said the man, Shadi Omar Salim Shorafa, 41, was shot after the soldiers ambushed him at the junction of the town and fired live rounds at him.

They added that the soldiers took the seriously wounded Palestinian away, before declaring that he died from his wounds.

Eyewitnesses said the soldiers were hiding in an olive orchard near the road when they ambushed the man and opened fire at him.

Abdul-Mon’em Issa, a member of Beita Town Council, said Shadi has been working as a water technician for 17 years, and recently became an advisor to the council due to his vast experience in water resources and management.

He added that Shadi was at the main entrance of the town, trying to unlock the valve of the main water pipeline leading to the village, especially since the Israeli army frequently closes it, depriving more than 15.000 Palestinians of the needed water resources, approximated at 1300 Cubic/Meters.

Issa stated that, according to eyewitnesses in the area, the soldiers fired more than twelve live rounds at the Shadi without a warning.

“An important part of Shadi’s job was to ensure the Palestinians in the town have the needed water, especially since Israel keeps closing the water supplies to direct them to the illegal colonialist settlers in the area,” Issa added, “One of Israel’s ongoing crimes and violations, is depriving the Palestinians of the needed water resources, especially in the summer.”

It is worth mentioning that the soldiers also ambushed and abducted four young men, near Sbeih mountain, and took them to their military post on its top.

The soldiers also fired gas bombs and rubber-coated steel bullets at Palestinians in Beita town park, near Sbeih Mountain, after stopping dozens of residents and cars and forcing them to leave the area.

The attacks led to protests in the area before the soldiers shot and injured 49 Palestinians on Sbeih Mountain near Beita.

Ahmad Jibril, the head of the Emergency Department at the Palestinian Red Crescent Society (PRCS) in Nablus, said the soldiers injured 49 Palestinians, including one, identified as Taha Hamayel, 24, who was shot with a live round in the leg and a rubber-coated steel bullet in the head.

Medics rushed Hamayel to a hospital in Nablus; his condition was described as serious but stable.

Jibril added that most of the injured Palestinians suffered the effects of tear gas inhalation and received the needed treatment at the scene.