Soldiers Prevent Palestinian Farmers From Entering Their Lands Near Bethlehem 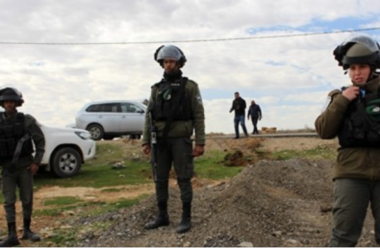 Israeli soldiers prevented, Saturday, Palestinian farmers from entering their lands, isolated inside an illegal colony, near Bethlehem city, south of occupied Jerusalem, in the West Bank.

Local farmer Mohammad Hamamra said the soldiers prevented him and many farmers from entering their lands in the Qiddis area, which became isolated inside the illegal Beitar Illit colony that was installed on lands stolen from the Palestinians in Husan town, west of Bethlehem.

The farmers held a protest demanding being allowed into their lands, but the soldiers kept them out.

Hamamra stated at least 100 Dunams of the farmers’ lands are isolated and added that the farmers are repeatedly denied access to them.