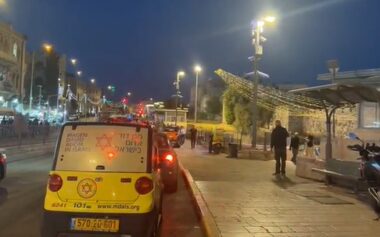 On Sunday, Israeli soldiers shot and seriously injured a young Palestinian in a police post in Bab al-Amoud in occupied Jerusalem after alleging stabbing officers.

The Wadi Hilweh Information Center In Silwan (Silwanic) said the young man Nathir Dar Ali, 20, from Abwein village, north of the central West Bank city of Ramallah, was shot in the security post after the soldiers detained him.

The Israeli police said the Palestinian allegedly stabbed and moderately injured an officer before he was shot.

After the incident, the police attacked many Palestinians and used the military canines to attack people before forcing them onto the ground and searching them.

Attorney Khaldoun Najm said the Palestinian was shot with several live rounds, including the neck, shoulder, and legs, and was left bleeding without medical before Israeli medics moved him to Hadassah Ein Karem hospital.

The soldiers and the officers detained and attacked many Palestinians and installed roadblocks, in addition to preventing the Palestinians from entering the Al-Aqsa Mosque and the Old City.

The soldiers also attacked and abducted three Palestinians in Silwan, south of Al-Aqsa Mosque, in addition to detaining a father and his child.