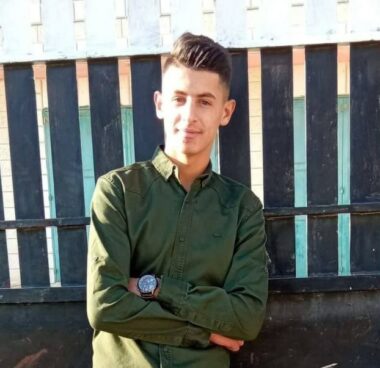 On Sunday evening, Israeli forces opened fire on a Palestinian youth near the illegal Israeli colonial settlement of Tuqu’, east of Bethlehem, in the occupied West Bank, killing him.

The youth who was killed was identified as 18-year-old Mo’tasem Mohammad Atallah, from the town of Harmala, east of Bethlehem.

The Israeli military claimed that the young man had infiltrated the colony’s land, and was “trespassing on the private property of a resident”. After killing him, the soldiers found a knife in Atallah’s pocket and claimed that was their justification for killing him.

The army then issued an order to all of the illegal Israeli settlers living in the colony of Tuqu’ to stay in their homes, saying (without evidence) that they suspected a terrorist attack was underway.

The Palestinian Ministry of Health did not confirm the identity of the young man, but the Palestinian Authority acknowledged that a young man had been killed, without confirming his identity.

Israeli paper Yedioth Ahronoth reported that “a Palestinian who infiltrated the Tekoa settlement was shot, and he was neutralized”, adding that, “the residents of Tekoa ‘ were instructed to stay in their homes for fear of infiltration into the settlement after a suspect entered a house in the settlement and was shot.” The paper also reported that Atallah was one of four young men who had entered the settlement.

No other Palestinians were apprehended. No Israelis were injured.

The killing of Atallah came after a week of lockdown in the West Bank and Gaza Strip by the Israeli military forces which run the two Palestinian Territories under martial law.

On Sunday, following a security assessment, Israeli military officials decided to reopen the crossings which had been closed for the past week – first in preparation for Jewish holidays, then, after an attack in Elad, Israel which left three Israelis dead on Thursday. The closure remained in place for residents of the village of Rommana, in the northern West Bank, which is home to the two Palestinians suspected of carrying out the Elad attack.

Also Sunday evening, another Palestinian young man was killed by Israeli forces near Tulkarem. He was identified as Mahmoud Sami Khalil Aram.